What follows is a work-in-progress, my collaboration with fellow Chimera member Viviana Hinojosa. It works in much the same way as echovirus12; Viviana started the process by creating a picture, which I then interpreted freely in the form of a prose poem. My piece then became the springboard for Viviana’s next picture, and so on. Who knows where this will end?

We are calling the project House of Mirrors, to suggest the distorted reflections of text and image and the viewer-reader’s disorientating journey through an imaginary space in which she may, from time to time, recognise herself. 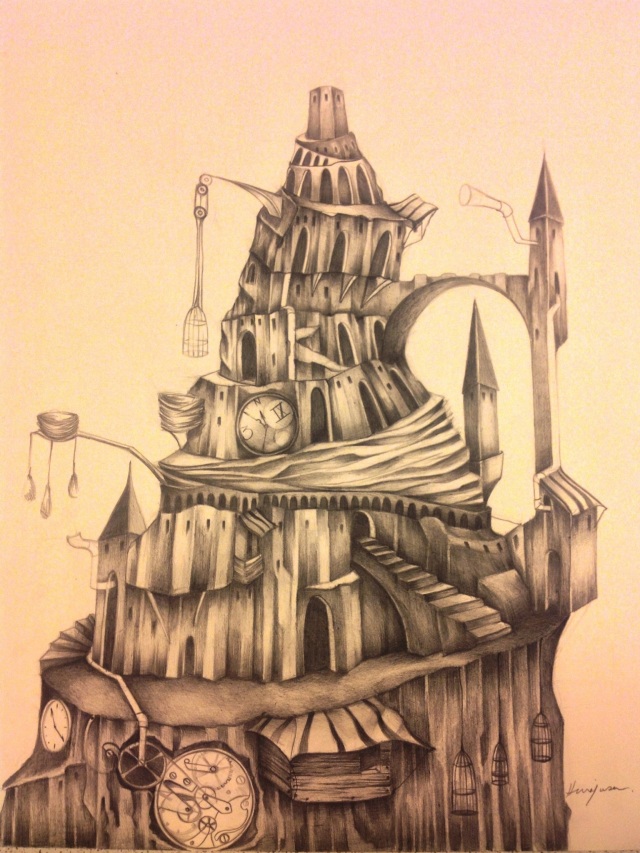 Time is enjoyed exclusively by those with money or celebrity. Kept in an ornamental cage, it tweets and chirps, flashing its feathers. Most of those who strut past the cage are only there to be seen and express no interest in the noisy, nimble creature.

They say time flies, but no one dares open the cage to find out if the idiom has any basis in reality. What would we do if time disappeared into the blue? 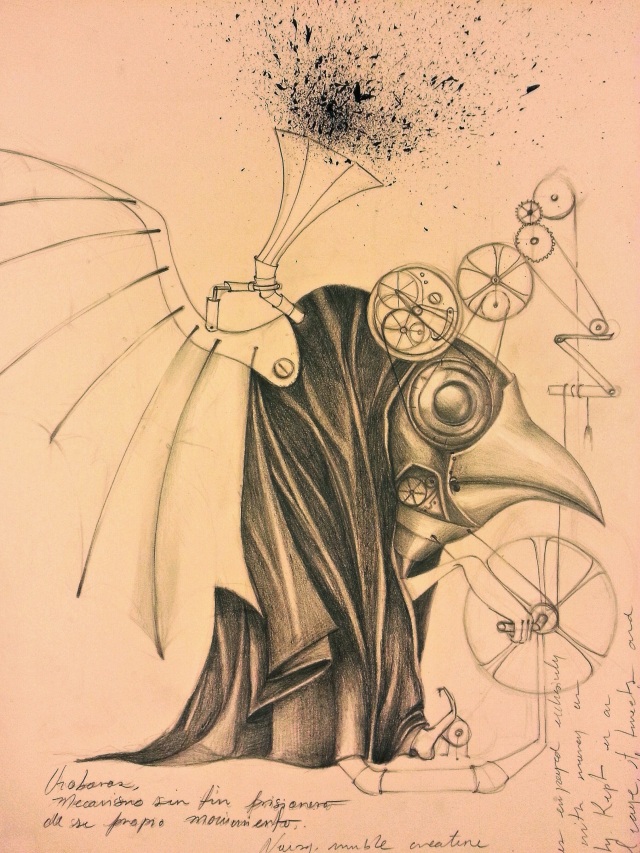 The moon is a mechanical bride. Once a month the veil that conceals her face is lifted by a system of pulleys and her phantom bridegroom appears. On that night, the children feel the tug of adulthood and weep in their sleep.

In the basement of the abandoned mannequin factory is a door no one has ever opened. Behind it is a cube-shaped room containing a box, wrapped in silver paper. The Bird King wrote the gift tag. What does it say? I’m not telling. But if you were to unwrap the box and lift its lid, you’d find inside a Wellington boot.

At first, amused by the idea of wearing just one boot, you’re tempted to put it on. But then, as you’re removing your shoe, you see in your mind’s eye a devil leaping at you from the darkness of the boot. So you decide against it.

Meanwhile, upstairs, the Bird King plays chess with the blind factory owner. White to mate black in thirteen moves. It’s time for you to leave.

If you insist on wandering around in the dark, you’re asking for trouble. You could be mugged, raped, beaten to a pulp, murdered. The city’s a fucking shithole. The housing estates are the worst: thousands of boxes, stacked into impossible towers, tottering and swaying in the brown night. The people who live in the cardboard coffins suffer a variety of ailments, physical and psychological: scoliosis, eczema, blindness, paranoia, megalomania, narcolepsy.

To sleep, perchance to dream.

I’ll start again. Let me try to shed some light on the matter. Let me tell you what happened to me. In the dusk, something purred as it slipped by. Was it a car or a cat I saw? 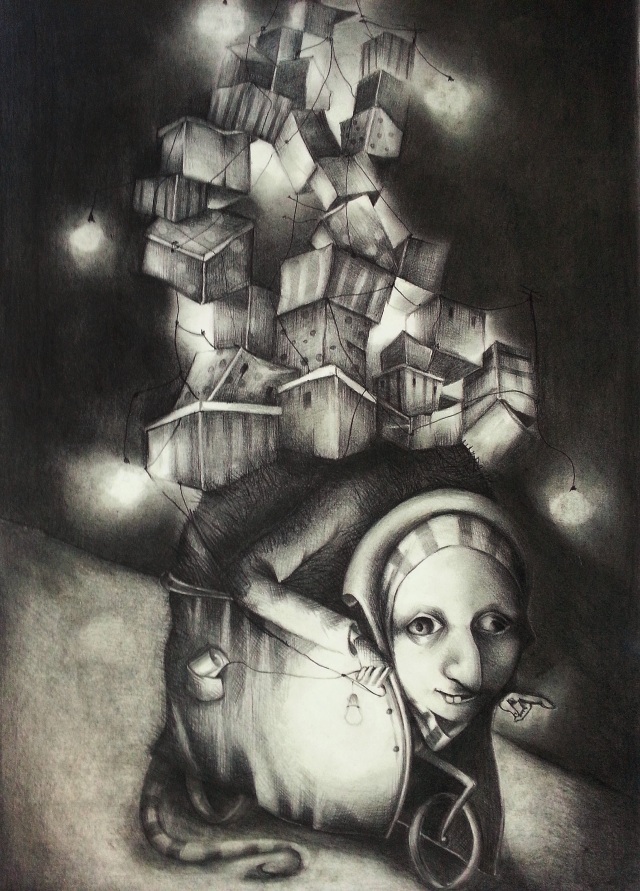 Little wheels creek and squeak. Open your eyes and look: there’s nothing there.

Last night you dreamt that you carried the weight of the world on your shoulders. You wanted to cry, but your paralysed body wouldn’t permit a display of emotion. When you woke up you realised you had no responsibilities, nowhere to be, nothing to do. Your tears blurred the bedroom.

Little wheels again, again. The routine of looking. As before, nothing there.

On Monday she saw a burning ship, a galleon like the ones you find in illustrated storybooks about pirates and dangerous adventures. Its sails were flames.

On Tuesday she found herself floundering in a sea of red wine. The shore was nowhere to be seen. She was tempted to dive under, mouth open, and inhale the ocean.

On Wednesday the ring finger on her left hand turned into a little scroll. Pulling it from the socket, she unfurled it and read a poem that made her laugh until she couldn’t breathe.

On Thursday her home became filled with an enormous cat. She lost herself in the musky heat of its fur.

On Friday she played poker with the devil. The stakes were low: her soul, his sense of humour. They soon became bored and abandoned the game.

On Saturday she looked into the mirror and saw a girl made of pine cones.

Sunday was a day of rest. She fell asleep over a book. The girl in the story swapped places with her, but no one noticed.

2 thoughts on “House of Mirrors”